Tom Harris is the executive director of the International Climate Science Coalition, an anti-science group that disseminates deceptive articles concerning climate change and global warming is support of the fossil fuel industry. The purpose of this blog is to provide a reference library of articles highlighting his activities.

Below are links to articles I have written or found concerning Mr. Harris and his practices, with the most recent on the top.

Tom Harris' Deceits Could Be Deadly
My response to Harris' claims that CO2 is harmless.


Avalanche of Disinformation from Harris and Ball


Ball and Harris attempt to discredit the data base showing the reality of global warming. They fail miserably. No surprise.


Tim Ball and Tom Harris Are Deceptive About the IPCC
Ball and Harris cherry pick statements from the IPCC mandate to make it appear that it has changed it's mission and is, therefore, untrustworthy. The argument is highly deceptive and invalid.

Tom Harris' Latest Deception About Coal
Harris tries to make the case that coal is clean and efficient.

My Mistakes Identified By Tom Harris
Harris claims I've made numerous mistakes, but has failed to accept my invitation to identify any of them.

Tom Harris the Fraudulent Scientist
Harris allows others to deceptively promote him as a climate scientist.

Harris is Wrong. Manmade CO2 Is Pollution
Since CO2 is produced naturally, Harris reasons any CO2 is, therefore, natural.

Tom Harris is Trying to Hide His APCO Past

Tom Harris of ICSC is Engaging in Censorship

Another Indication Deniers Are Losing the PR Battle

The Irrelevent Tom Harris: The Future of Denialism

Harris has a long history of being associated with the tobacco and fossil fuel industries. He denies both of these affiliations and has gone to great lengths to try and hide this history, including attempts to edit Wikipedia to remove any reference of his association, but the record doesn't lie.

The misnamed organization is a fossil fuel advocacy group and has received indirect dark money from the fossil fuel industry. Harris is the Executive Director.

According to the Canadian Lobbyist Registration System, High Park Group (HPG) is a registered lobby for the fossil fuel industry. Harris was the Director of Operations for HPG though the fall of 2006. Even as Harris was attempting to remove any history of his association with HPG, the company website stated,

Tom specializes in strategic communication and media relations and has 28 years experience in science and technology in the energy and environment, aerospace and high-tech sectors. He has worked with private companies and trade associations to successfully position these entities and their interests with media and before government committees and regulatory bodies. Tom holds a Bachelor of Engineering (Mechanical) from Carleton University and a Master of Engineering (Mechanical - thermo-fluids) from McMaster University.

This statement has since been removed. Several printed articles from the period state, "Tom Harris is mechanical engineer and Ottawa Director of High Park Group, a public affairs and public policy company." You can see one of those articles here. Other, similar articles have since been removed, so here is a screen shot of one article:

APCO Worldwide is one of the largest PR consulting firms in the world. In 1993, APCO and tobacco giant Phillip Morris created The Advancement of Sound Science Coalition (TASSC) in response to findings on the hazards of second-hand smoke.  Concerning Harris, APCO's website stated,

"Tom Harris, senior associate in APCO Worldwide's Ottawa office, specializes in strategic communication and media relations and has 25 years experience in science and technology, specifically in the energy and environment, aerospace and high-tech sectors. Mr. Harris has worked with private companies and trade associations to successfully position these entities and their interests with media and before various government committees and regulatory bodies. Specifically, he has worked with oil and gas, coal, nuclear, environmental and aerospace clients for whom he has conducted effective media and public relations campaigns." 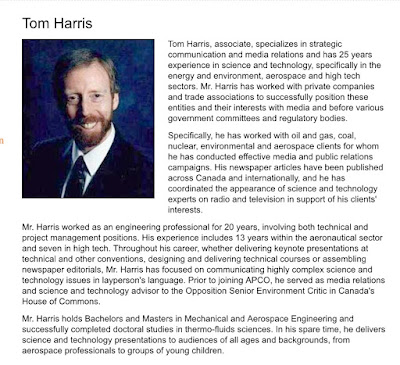 FoS is an anti-science non-profit organization funded by the fossil fuel industry for the purpose of undermining the scientific record. Tom Harris has repeatedly stated he was never employed or work for FoS. However, the record shows that is not true.


Some of the Friends, such as Madhav Khandekar, Chris de Freitas, Tim Patterson, Sallie Baliunas and Douglas Leahey, Tom Harris,[notes 13] were present at the conference which took place in New York City at the Heartland Institute's 2008 International Conference on Climate Change in March 2008.


It appears the connection to APCO Worldwide also came in 2002, at least by the time of the November 2002 APCO Ottawa press event, “Kyoto’s Fatal Flaws Revealed,” sponsored by Imperial Oil and Talisman Energy, among others.The event was organized by APCO consultant Tom Harris, who later produced the Friends’ first major project, the 2005 video Climate Catastrophe Cancelled.


Here is one of Harris' denials, which can be found in the comments section of my posting, Russell Cook: Climate Science Harasser.

NSRP was a non-profit organization devoted to climate change denial. Two of the three founding directors of the NRSP are registered Canadian energy sector lobbyists. Harris was Executive Director of NSRP beginning in  2006.

Harris is also a director in a small business.

Heartland Institute is an conservative organization opposed to environmental laws. It has been heavily involved with climate change denial activities and campaigns to promote that second-hand smoke is harmless. It received funding from the fossil fuel and tobacco industries. Harris has a long association with Heartland. He has helped fund their International Conference on Climate Change (ICCC) and been a speaker from at least 2008 through 2015.

In this video, Harris allows himself to be introduced as "Dr. Tom Harris," even though he has only a masters degree and is not a professor. Harris makes the amazing claim that preventing pollution is actually more harmful to the environment than allowing the pollution. Later, he directs the crowd to engage in a "well coordinated response" and contact newspapers after they publish one of his articles, to provide fake reviews about how much they enjoy articles by Tom Harris. He says this is to counteract the many negative comments by those who know and understand the peer reviewed science which proves global warming is caused by human activity. Harris states,


[...] We need regular high-impact media coverage of the findings of leading scientists — not just one or two publications, but we need to have hundreds all over the world. We need to have a high degree of information sharing and cooperation between groups, so that when Vincent Gray for example has an article published in New Zealand, we can take the same piece and we can (say) submit it to newspapers all over North America and Europe.

"We want to use the tools of the pros when it comes to lobbying".
And, yet, Harris frequently states he's not a lobbyist. Here is one example, which can be found in the comments section of my post Russell Cook: Climate Science Harasser.

Between 2009 and 2011, Tom Harris taught a course on climate change at Carleton University in Ottawa, Canada. The course has been evaluated and found to be lacking in science and credibility with over 140 factual errors.

Original Report: Committee for the Advancement of Scientific Skepticism:  Climate Change Denial in the Classroom

This is an outline of a climate change course taught at Carlton College, like the one Harris taught. Page one shows them using Biblical figures as proof of the anti-AGW message.

Also note how he allowed himself to be referred to as "Dr. Harris" and "Professor Harris," even though he doesn't have a Ph.D., only a masters. This is a pattern of behavior for Mr. Harris.

“Incredibly terrible professor. Astounding how unqualified this man is. His exams do not reflect what he taught. You can basically answer ever question with the idea of "What does professor Harris think about this?" He shouldnt be allowed to teach the class. He has no experience in the field.”

“This professor is the worst I have ever experienced in my academic career. I took this class in my final semester of a 4 year degree and got a B-, the lowest mark I have ever received (I have a 11.2/12 GPA). Whatever he says is not on the exam IS. He made mistakes when he created the exam and constantly interrupted our writing. Horrible experience.”

“The class was alright, but not up to the quality that I've come to expect from Carleton. Prof sends out too much unnecessary information out in emails.”

“Classes seem easy - online quizzes too. Then come the exams. Even though he promised no dates or specifics, that was pretty much all he asked. One of the guest speakers was impossible to understand. Spend less time on bloopers, more time on making the class understand! Not a bird course but an ok science credit, just be prepared to study a lot.”

“Prof Hariss seems to have tried very hard in creating this course and making it interesting. He is a fairly good speaker and makes it fairly interesting. However, like others have mentioned the course is based on his opinion essentially. There are interesting points are brings out, and certainly he's not always lying, but its not a fullyhonest cour(se)”

Articles by Harris have been reprinted by North Korea and Uzbekistan. These are the official, government controlled news media. Harris' claims have now been endorsed by a couple of the most despotic regimes on the planet.

This source has a lot of information that Tom Harris is trying to hide. It is very informative about his dealings and associations.

This article reviews one of Harris' articles claiming it is meaningless to have an average surface temperature. Seven climate scientists analyzed the article and estimate its overall scientific credibility to be ‘very low, stating,

Our reviewers unanimously characterize this article as misleading and in disagreement with elementary science. The author uses a scientifically baseless argument to support his claim that an average global temperature for the surface of the Earth is a meaningless quantity.

Other sources of information on Tom Harris and ICSC

The Loneliness of Being A Skeptic in Copenhagen

Deep Climate: Tom Harris, Heartland and the 2007 Bali open letter to the UN

The ICSC website stated, "Since its formation in 2007, ICSC has neverf received financial support from corporations, foundations or governments." But, documents from Heartland Institute shows that group donated $45,000 in 2007. When presented with this fact, ICSC removed that page. Tom Harris has continued to insist ICSC has not received money, either directly or indirectly, from the fossil fuel industry, even though Heartland is funded by that industry.

On July 13, 2006, Tom Harris responded to a June 6, 2006, posting on WunderBlog about him. In his posting Tom Harris's WunderBlog, he wrote the following:


"My climate change writing is currently funded entirely by an elderly Toronto-based private philanthropist who also funds scientific research and so wants to see the results of this research publicized."

Go to this page to see a list of Harris' articles:

Posted by Dialogues on Global Warming at 7:02 AM